I studied law at University College Dublin, qualifying also as a solicitor in the Republic of Ireland. Then I went to Cambridge University (Wolfson College) where I took a Masters Degree in Law and after that a PhD, in environmental law. By then I had become a Fellow in Law at Emmanuel College and I stayed in that job for seven years, before moving to King’s College London in the early 1990s. 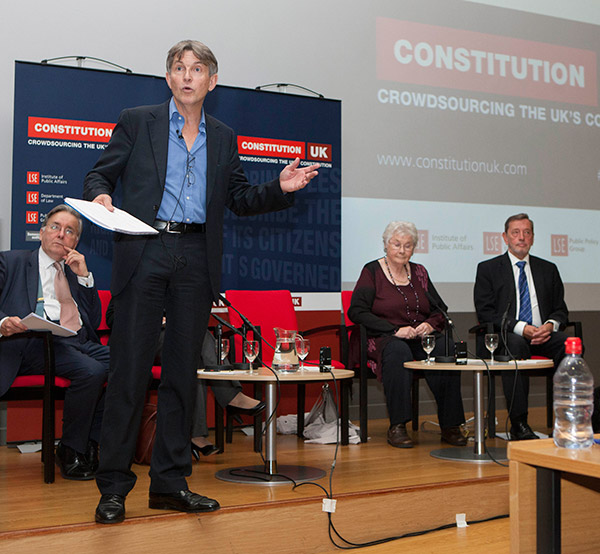 After many happy years at King’s I moved to LSE in 2002, to a post in the law department but also to become the first Rausing Director of LSE’s new Centre for the Study of Human Rights . In 2009 I ceased to be director of the centre and worked for a while half time as a professor of human rights law at LSE and at the same time the Director of LSE’s new Institute of Public Affairs.  Now I am back full time in the Law Department.

I have been a visiting professor at a number of universities abroad and have also been an external examiner at many universities in the UK and Ireland. I am a Fellow of the British Academy and a Bencher of the ancient Inn of Court the Middle Temple

I am also a Member of the Royal Irish Academy as well as a Bencher at the King’s Inn in Dublin.

My academic research focuses primarily on civil liberties, terrorism and human rights. My first book (co-authored with my colleague at both Cambridge and King’s, Keith Ewing) was Freedom under Thatcher and as its subtitle made clear it dealt with the state of civil liberties in modern Britain. I then wrote a book on terrorism, simply entitled Terrorwhich was published by Faber and Faber in 1991.

Since then I have kept up my interest in both these subjects, writing more books on each, for example Civil Liberties. Since I came to LSE I have also deepened my interest in human rights law and, more generally, in human rights, writing a book in 2004 called Principles of Human Rights Adjudicationand a more inter-disciplinary and shorter book in 2006, Can Human Rights Survive? This last book was based on my 2005 Hamlyn lectures.

Another book is a selection of essays on human rights and terrorism, published in April 2008 by Cameron May. A more recent book is a coauthored work with Virginia Mantouvalou: Debating Social Rights. It is probably right also to view my web-based project, completed in February 2011, as a book The Rights Future.

I had two new books out in 2013. The first is with my colleague and friend Costas Douzinas (Birkbeck) – now an MP in the Greek Parliament! – Cambridge Companion to Human Rights. The second, published in February 2013, was Liberty and Security. In 2014 came the second co-edited book with Costas, also from Cambridge The Meanings of Rights. My latest book was in 2016, On Fantasy Island. Britain, Europe and Human Rights. At the moment I am writing about torture and the British judges.

It has been really remarkable for me to see my various research interests rise to the top of the political as well as the scholarly agenda. Each is more complex that it first appears and I continue to work on a better understanding of the remit of each subject area and also on how they interrelate with each other. Because I have been reading and thinking about each area for many years I try to bring a longer historical perspective than is something to be seen in these sometimes dangerously current fields.

I have been heavily involved in trying to influence public discussion of my various academic specialisms. I have quite a large journalistic output, writing a regular column for The Tablet for many years and also for literary and political journals like The London Review of Books, Prospect and Renewal.

Apart from my own speaking engagements, the Centre for the Study of Human Rights, the law department and indeed LSE as a whole have lively events programmes which engage with the general public from a scholarly/public policy perspective. There are more details of these events here.

I think it is right that academics should not be shy about seeking to communicate their ideas to a wider audience. This is why I did my book as a blog in 2010-2011. And this is also what gets me very excited about working directly in the policy arena, for example at the Institute of Public Affairs.

I teach graduate and undergraduate classes at LSE in my various specialisms: human rights; civil liberties; terrorism and human rights law. I also teach a little on the undergraduate Public Law course and have done the same on the Civil Liberties course from time to time. I also have a number of research students writing PhDs in areas of my specialism.

I am a founding member of Matrix Chambers which started in 2000 Matrix . I have a practice which specialises in judicial review and which includes human rights law within its main fields. I have appeared in cases in the High Court, the Court of Appeal and the House of Lords and have been involved in applications to the European Court of Human Rights in Strasbourg. I also created the Matrix legal team which successfully defended the former prime minister of Kosovo against the international crimes with which he was charged before the International Criminal Court for the Former Yugoslavia, albeit a retrial has now been ordered in this case.

Please see the Contacts page for full details of how you can get in touch with me.

My thoughts on Human Rights, Civil Liberties and Terrorism.

My Books At Amazon